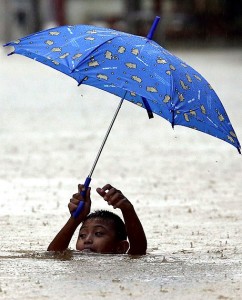 This is a little Thai boy struggling against flood waters in the Waeng district of southern Thailand on the Thai-Malaysian border. Thailand has declared a disaster emergency in all 13 districts of southern Thailand where dozens of villages were evacuated & most roads closed down from landslides.

Reportedly about 116,000 people are affected & okay, that isn’t as many as lots of other natural disasters but it would seem to warrant more than back page coverage. Come to think of it, a good share of planet Earth is covered under flood waters at any given time & there is never much media attention to it. South Asia seems to be particularly hard-hit.

This might suggest a method to the media madness of inundating us with every little tidbit & morsel of celebrity gossip. If we’re preoccupied with the Kardashians or even just with denouncing that media fetish, then perhaps we won’t notice the planet is drowning from climate change. No information, no questions asked! And God forbid, no sense of human solidarity with those losing everything & being displaced.

It isn’t that there is no media reporting on the connections between climate change & flooding (as well as hurricanes, heat waves, droughts, wildfires, dust storms, tornadoes), but that given the scale & destruction of these “natural disasters” there ought to be sustained, systematic education instead of the patchy reporting we get now. Such reporting would put neoliberal agriculture, mining, deforestation, & war under a spotlight & challenge the very foundations of corporate wealth. That aint gonna happen in the Wall Street Journal or the Washington Post.

The UN held a Climate Summit in September to which Ban Ki-moon invited representatives of the very forces causing climate change. They hold frequent such gatherings because they can see an environmental tsunami coming at them but they’re caught in their own system & unable to break out of the plunder-for-profit racket that is the very character of neoliberalism, the barbaric phase of capitalism. So they tinker around with proposals for legislation. The UN just held another one in Lima, Peru. Another conference; another dead-end.

The nearly one million people who marched outside the summit were an assembly of forces from across this globe fighting to save our beautiful planet, a struggle that in most countries is led by Indigenous peoples going toe-to-toe with the bulldozers & military might of neoliberalism. Solidarity has become the strategy for human survival.