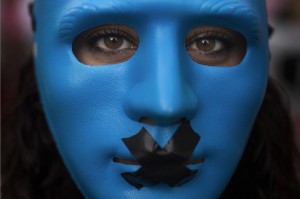 Despite massive protests in cities across Spain for months, the regime has installed a new security law criminalizing protests. It’s a sweeping, draconian law that does more than silence opposition to the EU-IMF austerity policies but is a frontal assault on civil liberties & democracy.

Activists are given steep fines for protests in front of government buildings; fines for obstructing police officers evicting families & seniors from public housing sold to private investors; fines for taking photos of police engaged in abusive behavior; fines for showing lack of respect for police; the homeless & prostitutes will be fined; & immigrants & refugees will be returned to Morocco without the due process required by international law.

The provisions may be indistinguishable from Spanish fascism but they are rooted in the juridical demands of neoliberal control & are not unique to Spain. Obama’s National Defense Authorization Act (NDAA) allows the regime to brand someone a belligerent, ignore due process, & apply Guantanamo justice by simply kidnapping & incarcerating them. It’s the legal model Israel applies in occupied Palestine, India in Kashmir, Mexico & other regimes for political dissidents, the US in the Black community.

Protest is now militarized; riot cops around the world confront seniors & people in tee-shirts & sandals with water cannons, grenades, tear gas, high-powered weapons, & armored vehicles. The style of fascism & storm troopers has become the norm. Despite the military aggression, people by the millions are protesting but have not been able to drive back this assault on democratic rights. And driving it back to the barracks is absolutely essential if we want to end tyranny.

What is the way forward? That is what working people need to think out. The answer includes organization, choosing uncompromising leadership, a willingness to work with anyone, refusing to buckle to any form of social hatred, & building international solidarity. Because if these regimes cannot tolerate democracy & equality, then these regimes will have to be replaced. Human beings were not put on this earth to serve profit for the few & misery for the many.

Our fullest solidarity with the activists of Spain who have not blanched from protest despite the new law. This protester is marching in Madrid.