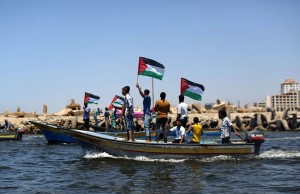 The Freedom Flotilla III to break the Israeli blockade of Gaza was intercepted by the Israeli navy. The lead Swedish boat called the Marianne of Gothenburg was hijacked & escorted to an Israeli port; the other three boats turned back rather than risk assault by Israeli commandoes. Such an assault on the 2010 flotilla caused the deaths of nine activists after commandoes boarded the ships. Israel has not been held to account for those murders.

Activists on the flotillas have received some criticism for attempting to break the blockade when Israel just marshals its entire diplomatic corps, propaganda officials, & navy to thwart the boats. They threaten Greek & Turkish officials with repercussions on economic, political, & military relations; they talk up a storm about flotilla activists aiding & abetting Hamas; & finally, they commandeer the ships to prevent them landing.

Since Israel pulled Zionist settlers out of Gaza in 2005, it has been setting up Gaza as a target zone with total control over the borders by air, land, & sea. Nothing goes in, nothing goes out without Israel’s agreement–including vital needs like medicine. Egypt, acting as henchman for Israel, sealed up the smuggling tunnels once used to bring in essential goods. The Israeli navy allows Palestinian fishermen to use only three nautical miles of sea instead of the 20 nautical miles allowed by the ill-fated Oslo Accord.

The flotillas have never gotten past the Israeli navy to bring supplies to Gaza. But Israel’s hysterical opposition to bringing bandaids, medicines, & solar panels to Gaza says everything you need to know about Israel’s political intentions & the value of the flotillas. It isn’t just the exposure of the Israeli blockade that’s important–though it’s necessary to isolate Israel internationally & build the boycott movement. Palestinian supporters in the growing solidarity & boycott (BDS) movement around the world want the people of Gaza to know they are not alone, that there’s a huge social movement emerging in their defense, that the truth of Israeli apartheid is out, & that justice is on the move. The daring initiative of the flotillas has been part of standing steadfast with Palestinians.

This is a photo of Palestinians in the port of Gaza waving the national flag during a rally in support of the flotilla. If the flotillas continue to be turned back, there is no recourse for justice but to build the hell out of the economic, cultural, & academic boycott (BDS) of Israel.