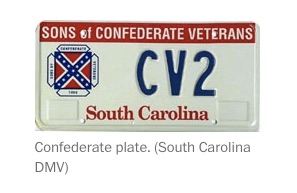 The US Supreme Court ruled for the Texas Department of Motor Vehicles (DMV) against the Sons of Confederate Veterans (SCV) who designed an insignia with the Confederate flag for Texas speciality license plates. When the DMV refused, the SCV took them to court claiming “viewpoint discrimination” in violation of the Bill of Rights guaranteeing free speech (the 1st Amendment).

Many states allow controversial plates. In Texas, there’s an anti-abortion plate & one honoring the Boy Scouts. In Virginia, they have plates for the NRA, tobacco & coal industries, other commercial enterprises, & even one promoting fox hunting.

Nine states offer Sons of Confederate Veterans license plates; all of them are in the South in the same states where there are still monuments to the Confederacy (Alabama, Georgia, Louisiana, Maryland, Mississippi, North Carolina, South Carolina, Tennessee and Virginia). In some of these states a portion of the license fee goes to the sponsoring organization. In Georgia, the local chapter of SCV gets $10 bucks a pop & the same at every license renewal.

The SCV, which claims 30,000 members (likely an exaggeration), say they are “profoundly disappointed” by the Supreme Court decision. Color the rest of us flabbergasted at the decision. Who knew there was a progressive instinct left among that lot sitting on the court!?

The SCV was founded in 1896, long after the end of the Civil War but not long after the complete reversal of Black Reconstruction in the South & at one of the worst possible moments in US history for Blacks when Jim Crow (the US form of apartheid) was legitimized & lynchings were massive. The SCV claim to be direct descendants of Confederate soldiers who fought to retain slavery. Their schtick is to use the Bill of Rights & nonsense about inclusion, diversity, & tolerance as a weapon to undo the alleged demonization & marginalization of the Confederacy.

Well let’s cut the crap! Behind some awkward diplomacy & posturing, what they want to bring back is the monstrous social hatred that brought them into existence in the first place. They haven’t been demonized–at least sufficiently–or they wouldn’t be on license plates in nine states. They haven’t been marginalized either because US school children learn nothing about this history in public schools. If it weren’t for the Civil Rights Movement & Black studies departments or books like People’s History of the US by Howard Zinn & Lies My Teacher Told Me by James Loewen, we would know nothing except the Confederate narrative & would still be reading Huckleberry Finn like it was an antiracist novel.

This is the speciality plate from South Carolina, which hoists the Confederate flag at its state capital. Coincidence that Dylann Storm Roof was reared there? We think not.