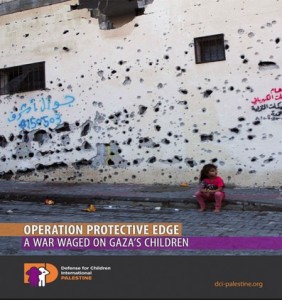 UN chief Ban Ki-moon has spoken–& not a moment too soon but with his usual equivocations–calling out Israel at the UN Security Council for murderous assaults on children in Operation Ethnic Cleansing in Gaza last summer. According to UN figures, 561 children were killed & 4,271 injured, many in disfiguring & debilitating ways, some permanently disabled & missing limbs.

It can’t be said our man was sharp in his condemnation: he was “deeply alarmed at the suffering of so many children as a result of Israeli military operations in Gaza last year.” But he cited them for bombing hospitals & schools used as UN refugee centers by those bombed out of their homes in Gaza.

All that money Israel spent commissioning corrupt lawyers & generals to testify that Israel did not deliberately target civilians is down the drain with just a tepid condemnation from Ban. Though one should give the man his due: his criticism meant going up not just against Israel but against the US backers of genocide in Gaza. And it suggests Israeli war crimes.

But Ban, as we know from his conduct throughout the entire siege of Gaza, is a man who talks out of both sides of his ass. He didn’t explain why last week he refused to include Israel in the UN’s annual list of shame for those countries that show reckless disregard or directly target children in war. For the past few months, several human rights groups hounded the UN to include Israel. An official at Human Rights Watch (HRW)–an establishment group which does not oppose wars but only wants them conducted without obvious barbarism (they’ve never attempted to elaborate how that can be done)–said “The Secretary-General can strengthen child protection in war by compiling his list based on facts, not political pressure.” Political pressure, of course, from the US, UK, & Israel.

HRW also wanted Hamas included on the list of shame for alleged rocket attacks on schools or recruiting child soldiers. Can they document that? One doesn’t have to be a supporter of Hamas’ political program to question if they have sophisticated guided missile systems. But even if they do, is Israel’s Iron Dome system not working well? Because the US is pouring millions into maintaining it & that would suggest waste from the Pentagon’s point of view. And if Hamas indeed targeted schools in Israel–& it would be unspeakable if they did–why is the Israeli death toll from Operation Ethnic Cleansing 66 soldiers & 5 civilians, with only one child? Was school in recess at the time? It was summer, after all, so why would Hamas target empty schools if they wanted to kill children? Or is HRW blowing smoke up our butts?

There’s an obvious parallel in US officials equivocating about whether the murderous assault on Black parishioners in South Carolina (which hoists the Confederate flag at its state capital) is a racist crime & the UN equivocating about condemning all of Operation Ethnic Cleansing as a war crime.

You can download a report issued by Defense for Children International Palestine called “Operation Protective Edge: A War Waged on Children” which details the targeting of children at:
https://d3n8a8pro7vhmx.cloudfront.net/…/operationprotective…

(Photo is cover of Defense for Children International Palestine report)