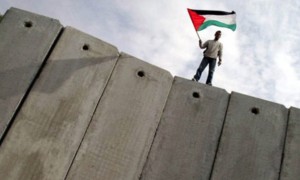 In “Mending Wall”, the poet Robert Frost said, “Something there is that doesn’t love a wall, that wants it down!” The demolition of the Berlin Wall in 1989 after 28 years would be the most dramatic demonstration of that. Two years after the wall went up (1963) US President John F. Kennedy stood on a platform in West Berlin & did some Cold War grandstanding by pronouncing “”Ich bin ein Berliner”.
This is the 25th anniversary of the destruction of that wall & Palestinian activists celebrated it by hacking away & breaking holes in the Israeli apartheid wall which Zionists call the “anti-terrorist fence.” Amongst the graffiti on the apartheid wall you can see “”Ich bin ein Berliner” in a few places. The irony is that now the US bankrolls the wall & lets Netan-psycho do the grandstanding. US politicians are better known as dull-witted than for bon mots but it was Janet Nepolitano who said about the US barrier wall on the Mexican border, “You build a 50 foot wall, somebody will find a 51 foot ladder.” Because “something there is that doesn’t love a wall.”

Nevertheless, ignoring the testimony of poetry & history, in the past twenty years barrier walls are having a barbaric resurgence & 6,000 miles have been constructed in the past ten years alone all over the planet. They’re not just eyesores; they are an assault on human freedom. They’re constructed of steel, concrete, razor wire, they’re electrified & surrounded by moats. There are watchtowers & electronic surveillance including underground sensors & infrared night scopes. In short, they are monstrosities. On the Mexican side of the Rio Grande River there are signs posted warning immigrants of alligators & US politicians actually proposing alligators be used to keep the undocumented out. There are no alligators in the Rio Grande but if there were it would be good to throw them some politicians to gnaw on beginning with Bill Clinton who first began militarizing the border as he advanced neoliberal plunder in Mexico. (The more you know about Clinton, the more you want to prosecute him. Actually he makes you want to skip due process altogether & go straight to lynching. But we leave barbarism to the barbarians.)

The Great Wall of China had military purpose. These modern walls are the stigma & hallmark of neoliberalism, which is the barbaric phase of capitalism. They’re intended to keep immigrants out & they seriously endanger, not to mention humiliate them–& they are found on every major immigration route. But they’re also intended to keep people in–like a prison. Like the apartheid wall around Gaza & the one around the West Bank. Or as Robert Frost put it, “Before I built a wall I’d ask to know what I was walling in or walling out.” Because that’s what walls are intended for–to wall in or wall out. Unlike Frost’s neighbor, we do not believe “Good fences make good neighbors.” And neither do those who build them.

Those who stand on the just side of history take a stand against these walls, against every impediment to human freedom & free movement. It’s our planet & we need to take it back. The Palestinian struggle is pivotal because they are tearing down those apartheid walls & leading the fight for human freedom. Ich bin ein Palestinian!

This is photo of apartheid wall near the West Bank village of Ezariya near Jerusalem with a Palestinian activist who found the metaphorical 51 foot ladder.