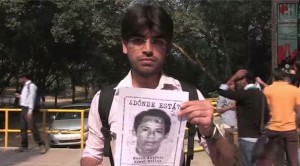 It’s always seemed some of the southern US states have the world’s dumbest & most corrupt politicians–most evident in their immigration policies. But Mexican politicians are giving the US a run for its money–& not in a good way. With the eyes of the world on their response to the disappearance of 43 student teachers in Iguala, Guerrero, MX, officials have managed to blunder every step of the way including President Peña Nieto’s delayed, wimpy, & evasive response to the crimes; a delayed search effort; official’s lies & contradictions about DNA testing on bodies found in mass graves; attempting to bribe the parents of the missing to remain silent with US $8,000 (100,000 pesos); & claiming a recent mass grave of completely incinerated bodies are the missing students without sufficient forensic evidence or investigation.

Truth of the matter is, some of those officials likely know exactly what happened to those students & who did it. Because if there is one thing their blundering has exposed it is the links between organized crime, cops, & the highest reaches of the Mexican government. There’s been a little official re-shuffling, with the governor of Guerrero removed from his post & the mayor of the city of Iguala & his wife arrested for putting out the hit. But in the end, this will all be blamed on corrupt cops on the take from organized crime & most officials will walk away scot-free. Thirty cops have been arrested so far & according to the Mexican Attorney General, the three arrested suspects from organized crime admit to killing the students upon orders from their leader. The question is, who is their leader & who is he taking orders from?

One of the most horrifying discoveries of the search for the students has been the discovery of 60 unidentified mass graves near Iguala since September 26th when the students were disappeared. There are 242 disappeared Mexicans just this year in Guerrero. Since 2007, there are 30,000 disappeared nationally & 100,000 killed. These figures likely don’t include the thousands of Central American immigrants also disappeared, murdered, often dismembered, & dumped in mass graves.

The shadow partner in all this is of course the US which supplies the dough & personnel to counter human rights in Mexico in order to jam through neoliberal policies resisted by Mexican working people & turn the country into a narco-state. Teachers have been in the leadership of opposition for a long time. Many teachers in the neighboring state of Oaxaca were forced to flee to the US as undocumented immigrants to escape being murdered or disappeared.

There have been solidarity rallies around the world, from NYC to Sydney, Australia, to Toulouse, France, to McAllen, Texas, to New Delhi, India. In the tradition of honoring those who gave their lives for justice, the rallies have held up images of the missing students. This young man is at the rally at JNU University in New Delhi, India.

This is a video of the JNU rally which is a simple & powerful act of solidarity: https://www.youtube.com/watch?v=IWGneFiEGlE&feature=youtu.be