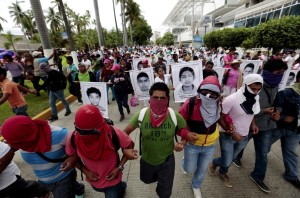 This is a section of the protest today in Acapulco, Mexico to demand the safe return of the 43 disappeared student teachers on September 26th. You cannot see in this photo how massive the protest was & as always when protests are large, media described it only as “thousands of protestors.” We don’t know how large it was but they came from all over Mexico & included 20 busloads just from the teacher’s college the young men attended (it was an all male school). Guerrero governor Aquirre Rivero warned about “outside agitators” & claimed “anarchists are on the way from Oaxaca” to participate. Of course they were. That solidarity thing really befuddles the corrupt mind.

One of the most moving & constant features of protests about people “disappeared” by regimes around the world is images of the victims. Even decades after their disappearance, family members & those who demand justice will make immense photographic displays of the victims. They will never be forgotten. Until the demands of justice are met, their images will always haunt justice.

Our fullest solidarity with the protestors.