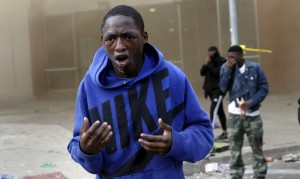 Media is in its element now–going after the Black community in Baltimore with articles denouncing the riots & photos of young Blacks demolishing police cars & pummeling riot cops with rocks. Black lawlessness on a rampage! Meanwhile 25-year-old Freddie Gray was laid to rest. And media quotes politicians & even his grieving family denouncing the riots.

Are we expected to join the chorus of denunciation & separate out the 10,000 peaceful protesters from the handful of rioters? If there are peaceful protesters it only means the cops haven’t yet taken their military arsenal after them, like in Ferguson. It just means they haven’t yet thrown out the Bill of Rights in Baltimore like they did in Ferguson. But they’re getting around to it beginning with that curfew. Then all 10,000 will be declared rioters & they’ll move in the National Guard.

There’ll be no denunciations here of Black youth who have endured decades of police harassment, seen Black teens around this country murdered by cops with impunity, saw the assassins of Trayvon Martin, Michael Brown, Eric Garner, Freddie Gray, & countless others walk away scot-free from justice. There’ll be no attempts to talk around the riots or portray the youth involved as the criminal element.

It’s very dangerous to be young & Black these days. If you wear your pants too low, if you lip off to the science teacher, if you smoke a joint, if you walk too fast or too slow, or loiter on a corner, you’re at risk of being harassed or assaulted. Or murdered for no good reason.

The problem is police violence, as part of the US war on Black youth, which has gone on for several decades without the media clamoring for justice but portraying the Black community as a war zone of lawless drug peddlers. The problem for youth is the compromised old guard of Black leadership who operate within the Democratic Party to silence Black protest against tyranny.

We leave the denunciations to others. We stand with the protesters in Baltimore. All of them. Without distinction. A new civil rights & Black power movement is emerging. A new leadership is emerging who will not truck with compromise. And that’s a glorious development we have no intention of parsing or denouncing.

Our fullest solidarity with the protesters in Baltimore. May Freddie Gray RIP. And may the unspeakable crime against him marshal in a new era of resistance to racism & tyranny.

This is a young man hit by pepper spray from riot cops. Is he a peaceful protester or a rioter?