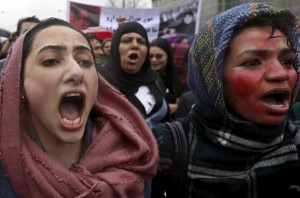 Street protests continue in Kabul, Afghanistan over the March 19 beating death of Farkhunda, a young woman who was attacked by a mob while police stood idly by. Male & female protesters are demanding justice & the prosecution of those involved, including the police who did nothing.

These demonstrations suggest US-NATO have bombed the misogyny right out of the Afghans just like the Pentagon promised when they occupied the country & started bombing everything in sight. That must be what the US is trying to do in Pakistan, Somalia, Yemen, Iraq too.

But now with men & women standing up together against misogynist violence–along with that nail salon in downtown Kabul–surely the Pentagon can announce “Mission accomplished” & get the hell out of there.

Of course the emancipation of women is only reason number umpteen for the war which began nearly fourteen years ago under the guise of hunting down Osama bin Laden in the caves of Afghanistan. The US has no intention of leaving or closing down its torture centers.

The women of Afghanistan do not need US marines to liberate them. For heavens sake, there isn’t a woman in the US who would request military occupation against misogyny here. We’ve taken a look at the rape statistics within the US military & we know something about US war crimes in Afghanistan.

The international antiwar movement must be rebuilt demanding US-NATO close down those torture prisons & get out of Afghanistan & Iraq–lock, stock, & barrel. Our fullest solidarity with the men & women of Afghanistan who have stood nearly alone against the mighty military force of US-NATO. Our deepest regrets we have been unable to stay the hand of US aggression but don’t give up on us yet.

(Photo is from April 8th march in Kabul by Omar Sobhani/Reuters. There were also protests today.)