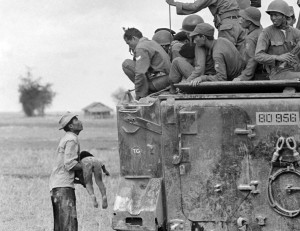 This week, on the eve of the 40th commemoration of the Fall of Saigon marking the rout of the US military by the Vietnamese & the end of the war, the Guardian-UK newspaper ran two retrospective photo albums. Both favorably–or at least, uncritically–portray US & South Vietnamese troops in action. There are GI rock & roll jam sessions & even a photo of Bob Hope with one of the starlets he used to sexually titillate soldiers. There are photos of both armies rescuing wounded comrades & recovering bodies or engaged in heroics. In some photos the bodies are piled on top of each other.

There’s no way in hell media can clean up the image of the Vietnam War. Millions of people around this globe know the truth & it will forever stand condemned–as should every other murderous US military intervention. There is no such thing as a “humanitarian intervention.”

There is also a 1966 photo of women & children crouching in a canal to “take cover from intense Việt Cộng fire”. We’re told the US military rescued them to safety from the US assault on a Việt Cộng stronghold. Of course there wouldn’t have been any Việt Cộng fire if the US army weren’t assaulting the village.
There’s a 1969 photo of a woman crying over a body bag with the remains of her husband “found in a mass grave containing civilians killed by Việt Cộng during the Tet offensive of 1968.” No alleged here? Couldn’t that mass grave have been dug by US soldiers? Thousands of Vietnam veterans don’t have PTSD for nothing.

Then there is the famous 1972 photo of screaming children severely burned in a US aerial napalm attack who are running down a highway followed by South Vietnamese soldiers. The caption informs us “A South Vietnamese plane seeking Việt Cộng hiding places accidentally dropped its flaming napalm on civilians & government troops instead.” Maybe a South Vietnamese plane dropped the napalm; maybe it didn’t. It’s the US military that pioneered the use of napalm in war, including WWII & the Korean War. In Vietnam, the US dropped almost 400,000 tons of napalm bombs just between 1963 & 1973. Napalm is particularly barbaric because it causes fifth-degree burns which go down to the bone.

The US also sprayed 43 million liters (11.4 million gallons) of Agent Orange on thousands of villages in Vietnam, Laos, & Cambodia to kill off crops & defoliate & expose Việt Cộng guerrillas. The poisonous ingredient in Agent Orange is dioxin which had long been banned in most countries because it remains toxic for at least 100 years & was known to cause at least 24 symptoms in those exposed & in their offspring. The Vietnamese government estimated 400,000 people died from Agent Orange poisoning & over a half million were born with incapacitating disabilities. Decades later it remains a problem in the underground aquifer system of Vietnam. Thousands of US soldiers & their children also died or sustained the symptoms.

This 1964 photo is a grieving father holding the body of his small child before a tank of South Vietnamese rangers. The child was killed when South Vietnamese troops pursued Việt Cộng guerrillas into a village near the Cambodian border. Another accident by the South Vietnamese army? Are we to believe the savagery of the Vietnam War all just a series of mishaps & South Vietnamese military incompetence?

The most important political responsibility of this generation is to rebuild the international antiwar movement. Media is now embedded up the ass of the Pentagon. If the truth is to be known about the barbarisms still going on in Afghanistan, Iraq, Somalia, Yemen, & elsewhere, it will be by activists committed to ending war & to making this world suitable for human beings to live & love in.