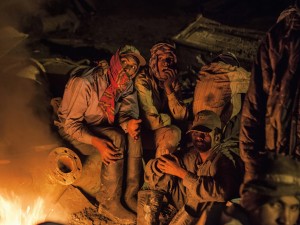 This photo of Bangladeshi ship breakers is from a May 2014 pictorial in National Geographic magazine. The caption read “Oblivious to the risk of lung cancer, workers fend off the nighttime chill by burning a pipe gasket likely containing asbestos.” Now there they go again–assuming working people are stupid. If that were so, they wouldn’t have to employ such violent repression against them. They wouldn’t have to stack the courts & laws against organizing unions for self-protection. They wouldn’t have to torture & kill idealistic & inspired union organizers, as they do.

It’s more likely these young workers know from decades of injury, occupational illness, death exactly what’s gonna kill them but they feel they have no recourse right now. South Asia is the ship breaking capital of the world. It’s where Europe sends its old ships for demolition because labor costs are dirt cheap. It’s another rendition of sweatshop economics.

The US labor movement has the resources to show some solidarity & strengthen union organizing in the ship yards & sweatshops of Bangladesh but they have their heads stuck up the asses of the CIA & US State Department & play a pernicious role instead.

Transforming the US labor movement, which is now fund raising from the likes of George Soros, is fundamental to strengthening the labor movement in Bangladesh & elsewhere–or at least getting a noose off their necks. If you want to know what Soros does to unionism, take a look at what he’s done to unions in Zimbabwe & immigration rights groups in the US. It’ll make your hair stand on end.

Our fullest solidarity & respect for our brothers in the ship yards of Bangladesh.