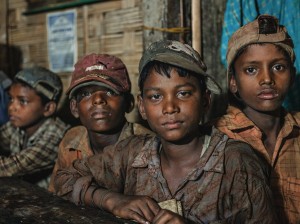 If eyes are the window to the soul, you are looking into the abyss of human suffering felt by children without hopes or dreams. These small boys are workers in a Dhaka, Bangladesh ship yard. Bangladesh has long been the leading country in the ship breaking industry (since 1964). Ship demolition is extremely dangerous work with a high profit margin because Bangladesh is designated one of the worst in the world for workers’ rights–& today, that’s saying a mouthful.

Workers, including children as young as four or five, work around asbestos, lead, cadmium, arsenic, & other toxic chemicals (which workers remove with their bare hands), diesel & other fuels, & in blistering hot, noisy, stinking conditions with little formal training & no safety equipment. The ship yards are notorious for the high number of workers injured (including amputations) or who die in gruesome ways, including from blowtorches they use & explosions.

They have no access to emergency services for an accident; no compensation if injured or disabled on the job; work at less than minimum wages with no overtime, sick, or vacation pay; & have no right to form a union.

There are many terrestrial & marine environmental problems created when dismantling ships but the health problems for unprotected workers are an entire catalog of horrors: heavy metal poisoning, cancer of the skin, intestine, kidney, liver or bladder; asbestosis; mesothelioma; disruption of the hormonal system; an entire range of respiratory, skin, & eye problems (including blindness). And lots of children are working under these conditions! The average life span is 40 years old. It doesn’t get more barbaric than that.

One media report showing workers suspended precariously off a ship said “Frequently without goggles, risking serious injury or blindness, workers climb tall rope ladders to the ships’ highest points, risking death if they slip, yet they keep working, enjoying building the ships.” Such rubbish could only be written by someone who’s never worked a day of hard labor in his life. It’s the old “Whistling while they work” routine from Disney movies which hasn’t a damn thing to do with the lives of these men & boys.

These little guys have a right to dreams–including one for having a long healthy, happy life. If this ain’t barbarism, then what is it? Meanwhile the number of billionaires in Bangladesh tripled in the past few years, according to the central bank.

Our fullest solidarity with the workers of Bangladesh. May they rise up & kick ass!