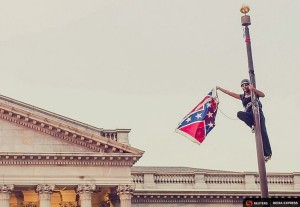 She & James Tyson, her accomplice in this magnificent act of defiance, were both arrested & the flag was re-hoisted. Under South Carolina law it has rights after all. To assuage activists demanding the damn thing be removed after the murder of nine worshippers last week, state officials called for its removal but that proposal must be approved by two-thirds majorities in both chambers of the South Carolina legislature, a confederacy of dunces.