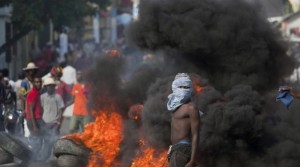 To prevent being ousted by popular vote, the Martelly regime has postponed elections since 2011 so they can rule by dictate. Media has shown some protesters holding up signs reading “Vladimir Putin, Please Help Us!” They wouldn’t be the only ones in the world confused by the political character of Putin. Volumes of nonsense is being written in his defense. Haitians would not need to turn to this disreputable, undemocratic politician if solidarity against decades of US military & economic intervention were stronger in this country, if it existed outside of a few cities.

This is where you see the value of racism in US foreign policy. Haiti was the first Black republic in the world, created in 1804 when an army of slaves defeated the army of Napoleon & became independent. That tradition of political resistance & intransigence has not been defeated. But it has also not been victorious against the armies of neoliberal plunder.

The US cannot let a Black-led republic prosper anymore than it can let a socialist country like Cuba survive. Such success up close & personal in the same hemisphere would lay to rest all the rancid lies taught US schoolchildren about the character of Blacks & about the character of socialism. Combined, this would shake the foundations of neoliberalism, the barbaric phase of capitalism, & possibly wield a death blow.

Both Clintons & the weasel Penn have worked with Martelly & Lamothe to turn Haiti into a sweatshop nation. It becomes tiresome to reiterate that solidarity in the US & around the world can help turn that situation around, can help the Haitian people throw off the yoke of tyranny & drive the US out. But that is the case. And that is the mission to create.