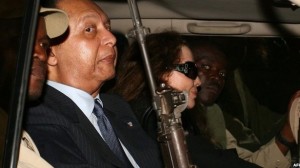 Here he is on his return from exile surrounded by armed guards lest the forces of Haitian justice catch up with his sorry ass. The Haitian people ran him out of the country in 1986 but his US-supporters sponsored his return, which was armed & less than triumphal, in January 2011. He was a paltry soul who committed massive crimes against the Haitian people & was supported & protected by the US.

US oligarchs hide themselves so we’re hoodwinked into believing we live in a classless, egalitarian society. Getting a load of Duvalier who strutted his class gives us an idea of what they’re like: insular, stupid, indolent, cruel, unable to function without minions, willing to commit the most egregious crimes for profit.

There isn’t much to say about him. Cockroaches have more emotional & spiritual depth–& far more value. Except good riddance. Break out the champagne. Let’s party. There is a certain let-down to the celebrations since he never had to face justice before the Haitian people. This is when you hope there’s a hell.

When the partying is over it’s long-since time to commit ourselves to solidarity with the Haitian people so they can throw off the shackles of tyranny & in the style of St. Patrick, chase the snakes out of Haiti.