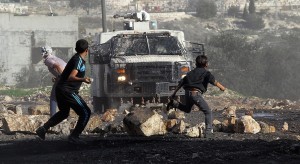 These Palestinian boys are going after an Israeli armored water cannon during a protest of Qadomem, the expanding Zionist settlement in the West Bank. The water cannon is not for irrigating fields; it’s an anti-riot assault weapon that causes multiple injuries including to internal organs & eyes & broken bones. Innovations in the use of water cannons include adding toxic dyes to the water & electrifying the water for additional harm.

Palestinians armed only with rocks & slingshots stand up against water cannons, bulldozers, & other armored vehicles, tear gas, & live ammo at weekly anti-settlement protests where hundreds of injuries & arrests are sustained by protesters.

Everyone recognizes the acceleration in Zionist settlements in the West Bank. The offenses are so egregious even Obama is putting on a dog & pony show of protest. The White House is issuing sharply worded statements & Obama is putting on his mad face for Netan-psycho. It’s the same kind of protest Obama issued about civilian deaths in Gaza during Operation Ethnic Cleansing which didn’t stop the Pentagon from supplying billions of military equipment to the the murderous campaign.

This week Obama is threatening Israel with sanctions over the settlements though we soon learn the sanctions would be only symbolic, not the debilitating kind used against Iraq or Iran. That means they’ll amount to little more than a “tut-tut” or the naughty finger because the US does not object to Israeli settlements & expropriation of Palestinians. It’s the tempo of the heist that’s at dispute. Israel is fundamental to US neoliberal scheming in the Middle East & the US doesn’t want that undermined by the psychotic intemperance & headlong rush of Israel to clear out the Palestinians by ethnic cleansing.

As the threat against Palestinians accelerates in Gaza & the West Bank, active solidarity becomes more imperative, starting with evangelizing for the cultural & economic boycott of Israel (BDS). This is a time for deepening education with forums & teach-ins & for combining that education with fundraising for humanitarian aid to Gaza. Education is as much a part of solidarity as protest rallies.
Our fullest solidarity with Palestinians. Boycott all Israeli products (barcode beginning 729); demand “No military aid to Israel!”