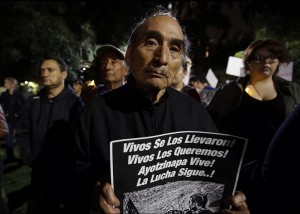 This is Rosalio Mendiola protesting the disappearance of the 43 students at the Mexican Consulate in Los Angeles. The vigil was held the same time as Obama’s speech on immigration. Because neoliberalism is the barbaric phase of capitalism, instituting its policies & practices has been a wrenching process devastating the lives of millions–especially those who resist it.

Only a few examples in Mexico would be teachers (particularly in the state of Oaxaca) & miners (in Sonora) who resisted neoliberal incursions & to escape assassination had to flee to the US as undocumented immigrants. That fighting spirit is an enormous asset to US workers & to the immigration movement here, especially when counterposed to the sniveling subservience of US labor leaders. But it is a loss for Mexican working people who watched some of their best activists flee for their lives.

Undocumented immigrants have been under massive, sustained attack throughout the Obama regime. He sweet talks at the same time he deports hundreds of thousands & dumps their kids in the broken foster care system. But in the past several years, immigrants have been among the most active democracy fighters in the US, despite their vulnerability to deportation. When the history of that movement is written, it would be so interesting to find out the role played by people like the Oaxaca teachers & Sonora miners. Because surely when the history of social transformation in the US is written, the immigration rights movement will play a central role.