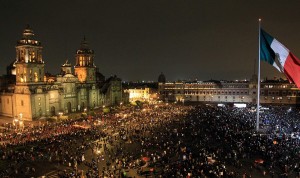 This is the Zócalo in Mexico City–the main plaza in the city, one of the biggest in the world, & the political venue of hundreds of national protests. It holds about 100,000 people. This is Thursday, November 20th, a National Day of Action in Mexico against the massacre of 43 student teachers in the state of Guerrero. Reportedly, protesters are not only students but also teachers, thousands of other union workers, & outraged Mexicans. Such actions took place all over Mexico.

In ironic symmetry, Obama was giving his speech on immigration (so-called) “reform.” Even US networks didn’t want to broadcast this once-vaunted orator as he blithered on & figured viewers would rather watch banal sitcoms. But US immigration policy has everything to do with the disappearance of those young people. The US & Mexican governments have formed a criminal confederacy against the people of Mexico & immigrants from Central America. The Mexican military is occupying its own country bankrolled by the Pentagon to deter immigration, facilitate the transformation of Mexico into a narco-state & a neoliberal dystopia. Thousands of students, working people, & activists who have stood up to this cabal–often led by teachers–have been disappeared or murdered.

The political movement emerging in the Zócalo is vital to social transformation around the world because it is in what the US government considers its back yard & is a showcase for neoliberal policies beginning with agriculture (which dispossessed farmers & farm workers & created massive immigration to the US); NAFTA, with its sweatshops on the US border; & presently the privatization of PEMEX (the state-owned oil company) turning Mexico into a series of catastrophic oil spills. Strengthening the movement in Mexico through solidarity helps weaken the stranglehold of the malignant confederacy which now tyrannizes the Mexican people & the immigrants making their way from US plunders in Central America.

Our sincere sympathies with the families who have lost a beloved to this conflict & our strongest solidarity with their movement.