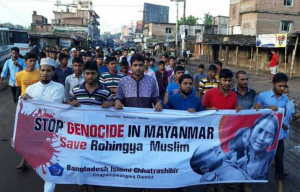 The International State Crime Initiative (ISCI) at Queen Mary University in London released an important study in 2015 titled “Countdown to Annihilation: Genocide in Myanmar.” It’s a powerful report, unsparing in its condemnation of the Burmese military. It concluded “The Rohingya face the final stages of genocide,” meaning they are on the verge of mass extermination. They may have used that formulation as a call to arms for human rights activists but it is a regrettable one politically because it lends itself to pity more than active solidarity & gives a sense that building solidarity is pointless, that it’s too late.

It’s beyond dispute that the relationship of forces between the military & unarmed Rohingya in Arakan state is to the disadvantage of the Rohingya. But there are still about 1.3 million Rohingya living there. There’s no way to know for certain how many Rohingya are refugees in other countries since so many have died fleeing & no agency has accounted for their lives & deaths. Because they are stateless & have no rights, thousands are living as undocumented in several countries trying to elude deportation; an unknown number are detained in prisons in several countries; an unknown number are victims of human trafficking. It is estimated that about 1.3 million Rohingya are living as refugees but there’s no way to know for certain since the UNHCR doesn’t register the overwhelming number of them for humanitarian aid.

Rohingya activists, like Kashmiris, are using social media to educate about their struggle against genocide & for human, democratic, & civil rights as refugees as mandated under international law. Without minimizing the extreme violence Rohingya face in Arakan, we should not regard this as the verge of mass extermination or consider the “final solution” a fait accompli but as the beginnings of building phalanxes of international solidarity to stand with the Rohingya in their struggle in Arakan & as refugees.

Photo is a Bangladeshi protest in defense of Rohingya.