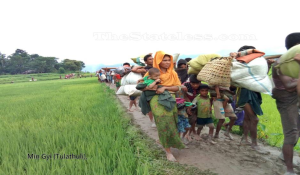 It’s estimated that at least 18,000 Rohingya have fled genocide in Arakan state just in the past six days. Estimates are as high as 2,000 but there’s no way to know yet how many have died at the hands of Burmese soldiers, how many assaulted, tortured, raped. We do know that several people, including little kids, have drowned attempting to cross the Naf river into Bangladesh.

(Photo of Rohingya fleeing from The Stateless @Thestateless1)