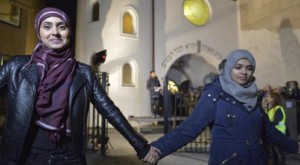 Now this is where the magic of social transformation begins–with the power of solidarity. Yesterday, in sub-zero temperatures, about 1,000 Muslims formed a “ring of peace” around a synagogue in Oslo chanting “No to antisemitism, no to Islamophobia.” The event was in response to the growing right-wing attacks on both Jews & Muslims throughout Europe.
One of the organizers said, “We want to demonstrate that Jews & Muslims do not hate each other.” Norway’s chief rabbi stood outside before the human chain & sang the traditional Jewish end of Sabbath song.

Israel & media will be in overdrive attempting to thwart such solidarity since distrust, animus, & the acceptance of racism is what Zionist ideology is based on. True to their nefarious commitments, media added an addendum to the report of this solidarity action by claiming the increase in antisemitic incidents began last year “when the conflict between Israel & Palestinian militants in Gaza intensified.” That lie & falsification of history is belied by Europol statistics showing 99% of violent acts toward both Jews & Muslims is primarily from right-wing nationalist groups.

Our deepest respect & fullest solidarity with this action.