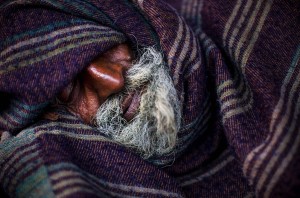 Homeless in India: this elderly man lives on the street in Delhi. There have been massive protests of seniors in India against the lack of social security. Dumping seniors however, is not unique to a country without social security. Since the IMF-EU austerity programs hit Europe, there have been hundreds of protests because pensions, along with health care & education, were among the first casualties of the neoliberal assault.

There isn’t much reliable data on the demographics of homelessness in the US but there is disturbing evidence that homelessness is increasing among seniors. It’s doesn’t take a whiz kid to understand why. It’s now nearly impossible for retirees on puny little social security checks to afford rents in metropolitan areas. It’s hard enough for working families with more than one wage-earner. Not only is rent control being eliminated but public housing is being sold off to private investors so they can jack up the rents or sell them at exorbitant prices. The same process that is causing mass evictions of renters in Spain is already in full swing in the US.

Children also make up a huge percentage of homeless people in cities around the world (including the US & India) where they are subject to a great deal of violence. It should be said outright, without coyness or timidity, that when the economic system is incapable of providing the elementary requirements of a human life, it’s time to rethink the options. And we ought to do it before climate change has us all buried in snow mounds up to our asses twelve months out of the year.