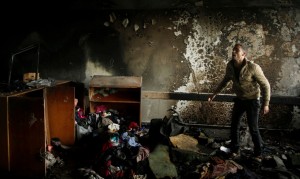 This is one of 15 schoolhouses in Gaza which the UN uses to shelter those displaced by Israel’s ethnic cleansing binge last summer. A UN refugee agency claims they house 10,200 people in them–which means the schools are either the size of the Taj Mahal or the agency is lying.

A nine-month-old baby boy died this week at the UN school in Biet Hanoun when an electrical failure caused a fire. The UN can’t make absolutely certain the facilities are safe for human inhabitance when they move in refugees? They can’t hire some unemployed electricians in Gaza to be on site & monitor the facilities safety?

Is this the same school Israel bombed last summer, claiming it was a Hamas rocket bunker? Fifteen people, mostly women & children died & 200 more were injured. The photo & video documentation of children punctured with shrapnel was unbearable to view. But just recently Israeli officials admitted what the world knew all along: there was no rocket nest in the school. It was part of Israel’s campaign to target children by claiming Palestinians use their children as human shields. Even in a refugee center. How many international laws does that break? Beit Hanoun is just a few miles across the border from Sderot, Israel, where lounge furniture was moved in to watch the ethnic cleansing like a spectator sport.

We would ask what Ban Ki-moon has to say about all this since given the scale of carnage & the crying need for shelter, the UN ought to be screaming bloody murder against Israeli carpet bombing & demanding prosecution for war crimes. But for the UN, humanitarian assistance is doled out with an eyedropper. They’re much better at delivering occupation & cholera.

Build the economic & cultural boycott of Israel (barcode beginning 729); demand “No aid of any kind of Israel!”