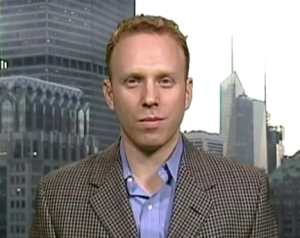 Smarmy Max Blumenthal is the social climbing son of Clinton sycophant-in-chief Sidney Blumenthal & has been trying to build his journalistic career on the backs of Palestinians & Syrians. There’s that adage about apples not falling far from the tree but also that biblical thing about sins of the father not being visited on the son. So perhaps Max came to smarmy all by himself. A rule of thumb is ‘never trust a man with smug written all over his mug.’

Smarmy Max plagiarized the drivel of Vanessa Beeley, Assad propagandist & daughter of a British diplomat, & writes what he calls exposés about the White Helmet rescue workers, denouncing them for being partially funded by USAID. His platform is Alternet, an online journal he edits where all the dead people write, including Ben Norton, Rania Khalek, Vijay Prashad.

This is a repost of mine from November 2016 on Alternet funding sources:
****
Max Blumenthal made quite a splash in October with his two-part hatchet job on White Helmet rescue workers in Syria. The articles were published in Alternet, considered a progressive alternative media source. His primary charge to discredit the White Helmets was their funding sources, including by USAID.

Blumenthal is a frequent writer for Alternet & since he’s so scrupulous about funding would be advised to check out its funding sources if he considers that the sole measure of corruption. Between 2001-2005 the top three financial backers of Alternet were the Ford Foundation (which the CIA operates through), the David & Lucille Packard Foundation (involved in population control/eugenics programs), & the Nathan Cummings Foundation.

As of 2014, Alternet kept many of its financial backers secret & there isn’t much information on other foundations listed except their connections to millionaire Democrats. One of them, The New World Foundation, was once chaired by Hillary Clinton. Still included among the publicly acknowledged financial backers is the Nathan Cummings Foundation which should be quite significant to Blumenthal since it has a public partnership with the New Israel Fund, a US-based Zionist organization very active in Israel.

Maybe our man Max should explain to us how the questionable funding of Alternet differs from the funding of the White Helmets?
****
Photo is smarmy Max so we can get a snootful of his smug. He has the kind of face you want to slap the crap out of so he needed progressive politics to counteract those impulses. He has instead added to our burden by becoming a mendacious Islamophobe & enthusiastic propagandist for Assad’s dictatorship. Hoping thereby to rise to celebrity journalist stature, he now writes hack for Alternet & other propaganda sites & lives life on Twitter.