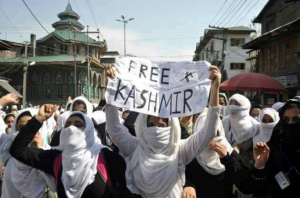 Received this message from Kashmir:

“Most of Kashmir has been blocked from FB. Internet is almost nowhere.”

Media blackouts cover a multitude of military aggressions against the Kashmiri freedom struggle which is why most of us never heard about it until Kashmiri activists used social media to educate & build solidarity. The struggle will continue in Kashmir, with or without social media exposure, but with more violence.

Now is the time to stand actively with Kashmiris against Indian colonialism: share articles, write statements of support, post photos of Kashmiri Intifada, so that India will know they can ban the internet but they will not silence the voices of Kashmiri freedom.