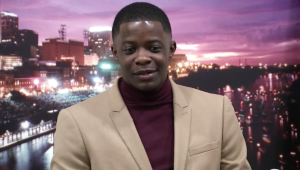 This is 29-year-old James Shaw, Jr. an AT&T worker in Antioch, Tennessee near Nashville who was honored by state politicians for grabbing an assault rifle away from a naked gunman shooting up a waffle house last Sunday morning. The gunman had already killed four people & injured three & when he stopped to reload, Shaw wrestled the gun away from him. Shaw is honored as a hero because other patrons, including his friend, were hiding in a bathroom while he hid behind a door to unarm the shooter. During the award ceremony, Shaw, who said he felt “like a fish in a barrel” while the gunman was shooting, modestly told the award ceremony: “But I want you all to know, & I’ll say this again, I am a genuine person: I didn’t actually do it to save lives. I did it to save my life. In saving my life, I saved other lives. So that’s probably the greatest thing you could do.” His honesty & modesty endear him almost as much as his courage.

The shooter, Travis Reinking, is a young white guy so there there will be no investigations into any links to terrorism although this is his second arrest for carrying an assault weapon. The first time he was arrested was last year in a restricted area near the White House. Since he was naked under his jacket during the Antioch shooting & when police apprehended him after a 36 hour manhunt, he is thought to be mentally unhinged. He may not be linked to ISIS or Al Qaeda & the guy probably is unhinged but since the four people killed included three Blacks & one Latino in a predominantly Black & Latino suburb, shouldn’t it be investigated whether the crime was motivated by racism & white supremacy?

The question is raised because in September 2017 in the same Nashville suburb of Antioch, a Sudanese immigrant opened fire in the parking lot of a church, killing one woman, & then entered the church where he injured seven others before a church usher helped disarm him. The woman killed was white which enflamed white supremacist bloggers & led to the FBI & Department of Justice opening a civil rights investigation. So doesn’t it seem obvious that a civil rights investigation should be opened in the shooting at the waffle house? Shouldn’t they determine if the shooter has any links to white supremacist groups & if he was motivated by revenge & hatred?

Our condolences to the families of the four victims. Shaw has set up this GoFundMe page for families of the shooting victims for burial expenses & compensation:
https://www.gofundme.com/5g07bvs