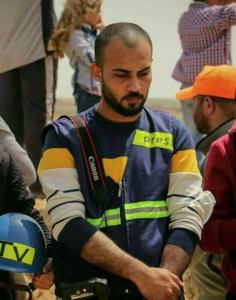 Palestinian journalist Ahmed Abu Hussein who was shot by Israeli snipers two weeks ago has just died from his wounds. Like the other journalists covering the Great Return March, he was wearing a clearly marked press vest. Like the other participants in the Great Return March, he was unarmed. He is the second journalist killed by Israeli snipers while 16 journalists have been shot, beaten, or suffered suffocation from tear gas. May he Rest In Peace.

Rallies in solidarity with the Great Return March have been held in some cities. The shootings of unarmed, peaceful protesters are a call to arms. There should be emergency rallies held around the world demanding Israel remove its troops & snipers from the apartheid fence with Gaza. Palestinians have a democratic right to fight against apartheid & genocide.