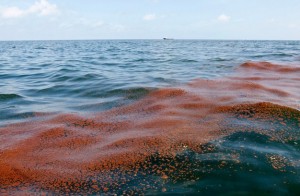 How many others haven’t heard about the 1,200 barrel (nearly 90 thousand US gallons) Shell oil spill in the same area of the US Gulf of Mexico as the 2010 BP oil spill that discharged 5 million barrels (210 million US gallon) & lasted for six months? How many other oil spills around the earth haven’t we been informed about?

The US government slapped BP & some of its officials with criminal charges including felony charges for the deaths of 11 oil rig workers & collected a settlement of $18.7 billion. BP claims it dispersed $54 billion for clean-up, environmental & economic damages, & penalties. That can’t be verified since the US government likely monitors any of that as little as it does oil rig operations in its territorial waters. And ‘that ain’t all she wrote.’ There are thousands of people whose health has been compromised by the oil spill, workers & fishermen who lost their livelihoods, environmental damage that cannot be repaired.

You don’t have to be an oceanographer to know that what happens in the Gulf of Mexico affects the Atlantic Ocean & other seas through tides, waves, & currents & the earth’s rotation. What happens in the Gulf doesn’t stay in the Gulf. Oceans are dynamic bodies of water now filled with oil spills & islands of plastic detritus from Walmart. Fish & migrating birds are choking on the stuff.

If those who run this planet cannot steward its resources any better than they are, our survival depends on removing them as fast as possible. No bones about it.