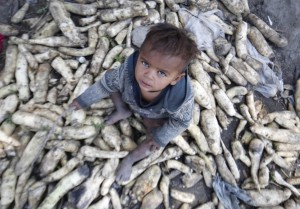 For the past several years, the only reports in western media about Kashmir were about the long-standing battles between public service workers, teachers, health workers & the Indian government in the city of Srinagar. The workers were demanding payment of wages in arrears, that all contract employees be made permanent, & to raise the retirement age by two years (India has no social security net).

What distinguished the strikes was how long they went on without resolution & the extremes of violence in police attacks on strikers, including the use of toxic purple chemical dyes in water cannons.

There is more coverage now–almost certainly in response to Kashmiri activists on social media–in an attempt to control the narrative about the Indian occupation of Kashmir. There is still little coverage of the Kashmiri Intifada but more images about everyday life in Kashmir–as if there were no occupation. There are photos of Muslim religious rituals; travelogue style images of nomadic peoples; gardening magazine shots of tulip beds.

Then there is this photo. The caption describes the little boy as the child of a broom maker playing with rotten vegetables outside his family’s makeshift tent in the outskirts of Srinagar, which is identified as the summer capital of Indian Kashmir. The caption goes on to discuss how India has the largest number of poor in the world. But if calculated as an Indian state, Kashmir has one of the lowest poverty rates in India.

Perhaps the caption could have mentioned India’s increasing militarism & the immense costs of sustaining 700,000 troops in Kashmir & the internal military operations against its own peoples. Not to mention the immense military costs it will assume as US henchman in the Asia-Pacific region. Ending the occupation & internal military forays wouldn’t solve India’s poverty problem but if Modi stopped buying weapons from Israel & the US a lot more schools & clinics could be built & a lot more jobs could be provided. It could even provide social security to its retirees.

The problem of silence about Kashmir is broader than media. In a major 2015 report by the UN on the systematic military use of sexual violence in war & occupation, they detail 19 countries but omit to cite Kashmir where it is systematically used by the Indian army.

The only solution to these deceptions is to use social media to tell the truth & for this Kashmiri activists are to be honored.