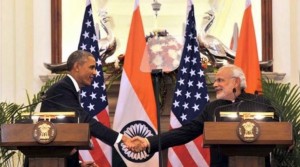 The new political & military alliance between Obama for the US & prime minister Narendra Modi for India bodes not well for the people of India, Kashmir, & of the entire Asia Pacific region. The US will now recognize India as a major defense partner in a new initiative to strengthen India militarily as part of US long-term military strategy & maneuvers against China for dominance in the region.

Modi will be addressing the US Congress next month to sew up the deal which will establish a special office in the Pentagon for India, that the US will sell more military equipment & technology to India, the US & Indian navies will conduct joint maneuvers, & the US will use Indian military bases.

The US has been building up militarily in the region for a while. Their strategy includes the Trans-Pacific Partnership; a new major military base in Australia; remilitarizing the Philippines & re-establishing US bases there; remilitarizing Japan, allowing the country to deploy troops abroad for the first time since WWII, & incorporating it into an offensive naval & troop force allied with the US; annual joint military maneuvers with several South & Southeast Asian countries including the Philippines, the military dictatorship of Thailand, Indonesia, Malaysia, Bangladesh, Brunei, Cambodia, & now India.

India already has a dangerous military alliance with Israel including substantial arms deals & long-term contracts to train paramilitary death squads in Kashmir–& of course to use against its own increasingly dissident peoples.

There have been massive antiwar protests against these maneuvers in both the Philippines & Japan. But if this military buildup–which not only strengthens US military might but militarizes all the countries in the region–is to be stopped, there have to be antiwar protests in the US, India, the other countries of South & Southeast Asia, Australia, & all over the world. We only need look at the killing fields of the Middle East to see where this is headed.