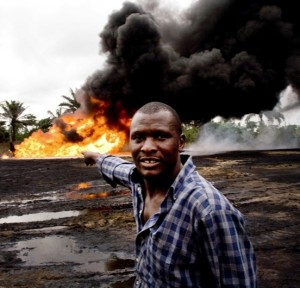 This photo is in the Ogoni village of Kpean in the Niger Delta where an oil wellhead has been spilling oil for weeks, spewing methane fumes & soot, coating the ground around it before catching fire, & affecting the crops, water, & air. The villagers have been waiting weeks for Shell to come & put the fire out. It usually takes months for Shell to service spills.

Since Shell began drilling in the Niger Delta in 1958, there have been thousands of oil spills involving millions of gallons in a densely populated region where people once earned their livelihood by farming & fishing. But groundwater is now completely contaminated as a result of oil spills & industrial drilling waste dumped directly into the Niger River. Even the rainwater cannot be collected for drinking because it falls as acid rain. Fishing is no longer possible. The substantial mangrove forest & rainforest are being steadily destroyed. In addition to damaging the environment & livelihood of residents, they are subjected to health problems including cancer, asthma, & other lung diseases.

The Ogoni people in Nigeria gained international respect when they took on Shell Oil over environmental ruin in the Niger Delta in the early 1990s. The writer Ken Saro-Wiwa founded the Movement for the Survival of Ogoni People which demanded control of oil on Ogoni lands. A quarter of a million Ogoni, nearly half the population, rallied to the cause. The Nigerian government collaborated with Shell to use deadly force & repression against the opposition & in a kangaroo court found Saro-Wiwa & eight other Ogoni guilty of inciting to murder & hung them in 1995.

This kind of collusion with the Nigerian government has only emboldened the depredations of Shell & the other oil companies operating in the region who don’t even maintain their facilities. In the past few years Shell has been raising alarm over what it claims is an unprecedented scale of crude oil theft from illegal bunkering or siphoning off the line. They called for greater security for their pipelines & claim such sabotage & theft are responsible for the blight of farm lands & rivers in the area. They accuse Nigerian pirates, militant groups, & criminal gangs of tapping pipelines.

A US diplomatic cable released by WikiLeaks exposed that politicians & military officials, not militants or small time operators, are responsible for the majority of oil thefts. They’re the ones who can commandeer & control access to barges & tankers to help oil companies loot thousands of barrels a day. The diplomatic cable reads: “The military wants to remain in the Niger Delta because they profit enormously from money charged for escorting illegally bunkered crude & from money extorted in the name of providing security on the roads.”

After nearly 60 years of oil exploration in Nigeria, the government neither meters nor monitors the volume of oil production by Shell & other oil companies, has no functioning regulatory agencies, & doesn’t have a clue what is produced & loaded on to tankers. After bribing corrupt government officials, the oil companies simply loot millions of barrels.

Nigeria is a major oil producer & 80% of government revenues come from oil exports. Meanwhile Nigeria imports most of its fuel ostensibly due to lack of refining facilities & 70% of Nigerians live on $2.00 a day & depend on a fuel subsidy.

In 2008 five Nigerians filed suits for pollution & destruction of livelihood in The Hague where Shell has its headquarters. Four of the cases were dismissed because the court said Shell could not have prevented the spills. One farmer won his case but it’s unlikely he will ever collect damages. According to a 2011 UN report on the Ogoniland region, restoring the area which is covered in thick black oil would take up to 30 years & cost $1 billion. That won’t happen without massive international pressure on the oil companies. It isn’t likely to happen under neoliberalism, the barbaric phase of capitalism, because the system simply isn’t able to control its own greed.