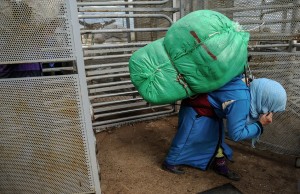 If there is a singular fault line in neoliberalism, the barbaric phase of capitalism, it is the degradation & brutalization of labor, including austerity programs that reduce working people to beggary, rely massively on child labor, & force millions to migrate dangerous routes to find work. Much of that is evident at Melilla, the Spanish enclave in North Africa adjacent to Morocco where thousands of African immigrants scale 20-foot razor wire fences to get into Europe to work. They are subject to violent assault by both Moroccan & Spanish riot cops & if they manage to successfully enter Melilla often arrive limping with severe injuries.

But at Barrio Chino, a pedestrian border crossing between Melilla & Morocco, an estimated 8,000 women known as Porteadoras or Mule women go back & forth without a visa carrying bales weighing between 150 & 220 pounds on their backs. A tax loophole allows hand-carried packages taken across the border from Spain into Morocco to be considered as luggage & duty-free. So that’s how many small electronics, car tires, clothing, food, toiletries enter Morocco. According to the American Chamber of Commerce in Morocco, more than €1.4 billion worth of goods (US $1.59 billion) are carried across the border into Morocco every year by the Mule women. So the trade is lucrative to traders but not to the women who earn between three to four euros per trip. Some women try to make more than one trip per day. Since the crossing is only open four days a week that means they make about 15 or 20 euros a week, or $20 to $27.

It’s dangerous work & many women have been trampled to death at the narrow pedestrian crossing. It’s also now competitive work with younger unemployed men trying to take over the jobs. Many of the Mule women are older women who have been widowed or divorced, as well as single mothers. It doesn’t take a chiropractor to see how crippling this work is for even younger workers.

Emilio Guerra, a representative of the Spanish Union Progreso y Democracia political party, is frequently cited in media objecting to the treatment of immigrants & conditions of labor for Mule women at Melilla but there appears to be no active solidarity action of any kind. Since Spain’s draconian new security law targets immigrants as well as civil liberties, we can hope immigrant rights & the labor rights of these women will be included in the political fight against repression & austerity attacks on working people under the iron-clad law of change that “an injury to one is an injury to all.”