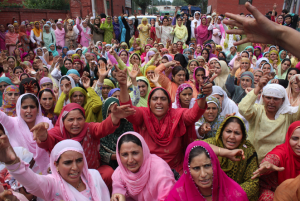 Sexual violence associated with war & military occupation is an international crisis involving tens of thousands of mostly women & children every year. It is a form of torture also commonly used against men political prisoners.

It is not a private crime but functions as a tool of military control which has for too long been glorified in culture & winked at as a “boys will be boys” thing. Meanwhile thousands of victims live with stigma & shame, suffering incapacitating physical & psychological consequences in social isolation.

The advocacy campaigns of victims, feminists, human rights activists of the past several decades are beginning to wrench this monstrous crime out of the shadows. These activists scorn any imputations against the victims & stand with them in solidarity. Without flinching, they lay all shame & stigma on military impunity & demand the governments & military forces involved be prosecuted.

Photo is women protesting brutal rapes of two women in the Shopian district of Kashmir in 2009.

Article from Pakistan Today about military use of sexual violence in Kashmir written by me.