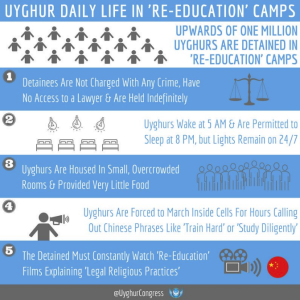 The Uyghurs are a Turkish speaking, predominantly Muslim ethnic group facing extreme persecution by the Chinese government. Uyghur activists report that over one million Uyghurs are detained in Chinese “re-education camps.” There has been almost no reporting on their struggle against persecution except by exiled Uyghur activists on social media. Pakistani journalist Usman A Khan Tahir has written several pieces about their persecution which involves all the anti-terrorism canards & vilifying inherent to Islamophobia. Like every struggle against ethnic & religious persecution & oppression, it’s a complicated issue but Uyghur activists are playing an important role in elaborating its character so that we may understand.

In addition to mass detainment, Uyghur mosques have been desecrated, demolished & turned into Chinese propaganda centers; Islamic symbols & Quranic verses have been replaced with pro-Chinese banners & flags. The Quran has been burned, some have been forced to eat pork, & anyone with a beard or hijab is labeled a terrorist by the Chinese government. Uyghur activists report that Chinese troops have walked pigs into mosques during prayer time, stopped prayers & forced those present to drink alcohol.

Islamophobia is the battle cry of the most reactionary & fascist forces in the world today so educating ourselves about the struggles of Uyghurs & other oppressed Muslims & rendering solidarity to their struggles is extremely important. It is of a piece with the persecution of Muslims across the globe. On Twitter you can follow Uyghur activists on: https://twitter.com/VoiceUyghur & https://twitter.com/UyghurCongress. Through those sites one will find many other links to Uyghur activists.

(Meme is from Uyghur Congress)