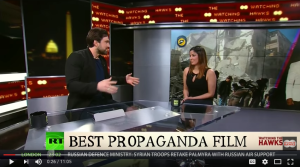 Rania Khalek is struggling to salvage her career as an “independent” journalist after embedding herself with the Syrian army last year & traveling to Aleppo with Bartlett & Beeley. That hasn’t hurt their careers much but they’re professional propagandists on Assad’s payroll while she has no idea what the hell she’s doing.

While on the road back to Damascus accompanied by Syrian soldiers, Khalek got sick & wondered aloud on social media if she had been poisoned by the Syrian army since they were so controlling. This outraged Bartlett & Beeley who roasted her for impugning their beloved Syrian army & the Assad regime. A falling out between ardent Assadist ideologues & groveling, inept wannabes can get pretty nasty.

RT apparently has not given up on Khalek yet since they often enough interview her as an expert on Syrian politics based on her one week under close supervision “If It’s Tuesday, This Must Be Belgium” kind of tour. The network seems to be testing her out for a full-time gig. Her latest is an interview on RT by Sean Stone, the actor & son of Oliver Stone who already has a regular gig on RT. Not unlike his father, Sean Stone is a full-blown libertarian conspiracy thinker who navigates complex political issues by intuition & paranoia & doesn’t appear to have cracked a book since high school. He is just as ignorant as Khalek on the issue of Syria & just as ardent a supporter of Assad’s dictatorship & Russian military intervention.

Stone, who four years ago was dismissive about terrorism & called the so-called war on terror “constant fear mongering & aggression,” interviewed Khalek about the White Helmets & was now feeding her lines about the Syrian army liberating Syrians from “jihadist terrorists.” Neither has the investigative integrity considered de rigueur to an honest 7th grader. Watching Stone interview Khalek brings to mind the phrase “the worst are full of passionate intensity” from The Second Coming by W.B. Yeats because what they lack in understanding, they try to make up for with feigned ardor.

Some Assadist media (that not run by Bartlett & Beeley) like Mint Press News publish Khalek’s endless laments about the hit her career has taken since her ill-fated whirlwind tour of Syria intended to give her credentials but which has brought her shame. For Khalek, revolution & counter-revolution in Syria is all about her; it’s happening 6,000 miles from her wounded ego that no one will publish her articles or pay her honoraria to speak. She complains that she’s being silenced & smeared, “marginalized & ostracized” by opponents of Assad’s dictatorship when actually her career is tanking because no one gives a damn what she has to say; she doesn’t know anything. Her recent writings on media coverage of Syria & the refugee crisis are an embarrassment of groveling apologetics, perhaps hoping Assad will take notice & put her on the payroll too.

Alas, poor Rania! Thou hast undone thine own career by thinking you can wing it & play lightly with the life & death questions of revolution & counter-revolution in Syria. Thou hath wrought this upon thyself & will have to live with oblivion which many before you have preferred to shame.