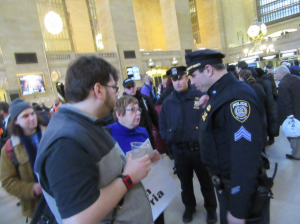 Yesterday, a concert in tribute to the White Helmets at Grand Central Station in NYC was aggressively interrupted by a handful of activists led by Sara Flounders from the Hands Off Syria Coalition. Flounders belongs to Workers World, a lilliputian left group with Stalinist politics. She’s been involved in antiwar work since the 1990s where her most enduring efforts have been in maintaining sectarian control rather than building a broad-based democratic movement open to all.

Resorting to aggressive action against those who disagree with you typifies a certain kind of politics: Brownshirt politics like the thugs Nazis used to break up the rallies & meetings of opposing parties & to intimidate Jews & Romani. This is not to suggest that Flounders & all members of the Hands Off Syria Coalition are fascists–though some members are. It is to suggest the trajectory of a political method using coercion of any kind against those you see as political opponents. (Self-defense against occupying armies is a different matter entirely.) But interrupting a musical tribute to the White Helmets? Does the Hands Off Syria Coalition find rescue workers that threatening to their politics? Are they willing to follow this trajectory to its inevitable use of violence?

In the early 1970s, a small left group led by Lyndon LaRouche, made the same transition as Workers World & Socialist Action (also in the Syria coalition) from socialism to libertarianism. The LaRouche group launched a campaign to physically liquidate the Communist Party (CP) by attacking their events with nunchuk martial art weapons. The CP had detestable politics (still does) but violence against them was absolutely excluded by activists as a method to oppose them or anyone else for that matter. Other socialist activists came to the defense of the CP by helping to protect meetings where they were attacked & many defenders were injured in doing so. Workers World was not involved in that defense.

The LaRouche group became a cult, complete with obedience training, brainwashing, libraries of conspiracy theories. Many members became well-known libertarians & are leading Assadist ideologues. Most prominent is F. William Engdahl who is frequently interviewed on RT, The Real News, Press TV (the Iranian news source), & regularly makes the rounds of Assadist media, including Global Research (where he is a research associate), Sputnik News, SOTT (a David Icke publication edited by Eva Bartlett), Voltaire Network (a hotbed of libertarian pro-Assad propaganda). It took socialist members of the Hands Off Syria Coalition over 40 years to arrive at the place pioneered by Lyndon LaRouche: the stinking landfill of history. If they have any good sense left, that should give them pause.

Assadists are boasting of the disruption of the White Helmet concert at the same time as they denounce the youth protests against Trump, the Women’s March, & the protests against the Muslim ban. That’s because their right-wing, hate-filled political perspectives are only able to gather handfuls to support Assad’s dictatorship & Russian military intervention in Syria so they resort to grandstanding stunts. That does not make their action less reprehensible nor less dangerous as we know from how Brownshirts became Nazi Storm Troopers.

Principled antiwar activists condemn this action by the Hands Off Syria Coalition. There is no place for such aggression in the antiwar movement–although of course, it is hard for the Coalition to call itself antiwar when it supports Syrian & Russian bombing of civilians. We should demand a public statement by the Coalition condemning this action by Flounders & other activists & disassociating from this kind of politics.

(Photo is Flounders talking to police)