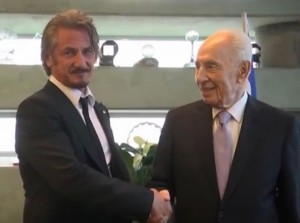 It seems to be a de rigueur moment in Israeli propaganda that dignitaries & celebrities visiting Israel meet with Shimon Peres for a photo op. Media reports of Sean Penn’s recent meet & greet with Peres all say it was an awkward encounter between the boor & the terrorist. Why it would be uncomfortable for either one is unexplained.

Penn was in Tel Aviv to give the keynote address at a conference on Israeli aid to Haiti sponsored by IsraAID. No one could doubt the spirit of largesse exists among Israelis but it might be curious that it doesn’t extend to Palestinians except that IsraAID’s money comes primarily from the biggest Zionist organizations in the world. That doesn’t make the organization so much tainted as tendentious–& quite frankly calls into question its actual role in Haiti.

Some will be disappointed in Penn for hobnobbing with Israeli apartheid & with Peres, one of its chief architects. But for those who follow his pernicious role in Haiti, this is par for the course. Penn is a longtime, close collaborator with Haitian president Michel Martelly, a committed Duvalierist & admitted former terrorist member of the Tonton Macoutes. The Macoutes were Haitian paramilitary death squads created by dictator François “Papa Doc” Duvalier which continued to operate under the regime of his son dictator Jean-Claude “Baby Doc” Duvalier.

Both Duvaliers used the Macoutes against political opponents in a reign of terror where hundreds of thousands of people were disappeared, tortured, murdered, stoned, burned alive, their corpses put on display & often hung in trees. Family members who tried to remove the bodies for burial were themselves disappeared. Shades of the Naqba carried out by Zionist paramilitary death squads against Palestinians.

In 2011, when the US brought their ally Jean-Claude “Baby Doc” Duvalier back from the exile he had been driven into by popular revolt in 1986, Penn socialized & collaborated openly with him. None are too contemptible or monstrous in criminality for Penn to associate with.

Martelly & Penn collaborated with Hillary Clinton (as US Secretary of State) & Bill Clinton (orchestrating activities for the US government in Haiti while enriching his personal fortunes) in turning post-hurricane Haiti into a sweatshop economy. Using coercion & ignoring the needs & demands of the Haitian people, they prioritized & fast-tracked infrastructure projects like industrial parks with sweatshops, highways, telecom, building the tourist industry, & privatizing public services–all of which suit the needs of international capital & exploitation. They refused to build homes, health centers, & schools–which suit the needs of the Haitian people, many of whom still live in squalid camps after the 2010 hurricane. Penn was/is with the Clintons & Martelly every step of the way, trying to provide a babyfaced, “good-guy” humanitarian image to ruthless plunder.

If there was any discomfort on Penn’s part in shaking hands with Peres, it wouldn’t be due to the latter’s role as architect of Israeli apartheid & ethnic cleansing but that Penn’s role in Haiti is now open to question. At least now the truth is out about the contemptible fraud called the humanitarianism of Sean Penn.

(Photo of Penn & Peres from still shot of video)