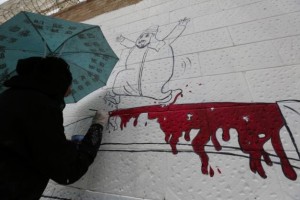 The Saudi-led coalition of feudal monarchies & military dictatorships bombing the hell out of Yemen for now nearly six months claim it’s all about the “Shiite Houthi rebels” in Yemen. It appears from Syria, Iraq, & now Yemen, that the US & reactionary Arab regimes prefer prolonged civil war to popular democratic revolutions. The intent is to destroy every vestige of the massive uprisings against oppressive regimes.

Yemen is beginning to look like Gaza & Syria after months of bombing. That not only shows the barbaric lengths reactionary regimes are willing to go but expresses how profound their fear of popular democracy. Estimates are that 3,000 people have been killed in the bombing, but let’s get real–the US, which has been drone bombing in Yemen for years, & its Saudi-led allies have never considered the lives of those being bombed anywhere of enough value to actually tabulate.

Graffiti played a big role in the Yemen uprising of 2011, even after the mass protests declined. In an extraordinary act of courage, this Yemeni activist is putting anti-Saudi war graffiti on the wall of the Saudi embassy in Sanaa.

The greatest political need is to rebuild the international antiwar movement to stay the hand of military aggression before these deranged regimes turn the entire Middle East into a killing field.

Our deepest respect for this activist; our fullest solidarity with the people of Yemen.