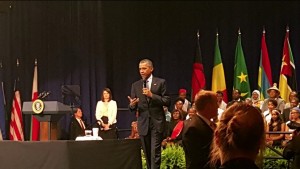 Shortly before the end of apartheid in South Africa, I was invited to a conference in Boston of South African students in the US who I was told were anti-apartheid activists. It turned out the students were all studying here on US State Department fellowships. As the conference went on, I realized they were being groomed by the US government as Black leadership after apartheid ended & I realized that because it was expressed in different ways by many of the participants. It didn’t bode well that at the panel on women’s rights, most of the participants got up & left–for which they were soundly berated by the women panelists.

Now the news is all about Obama addressing the Young African Leaders Summit (YALI) & its flagship program the Mandela Washington Fellowship (MWF). Obama started YALI in 2010 to “connect the next generation of entrepreneurs, educators, activists, & innovators with resources from the US Government.” The MWF, which YALI began in 2014, brings 500 young Africans to the US every year “for academic coursework & leadership training & will create unique opportunities in Africa for Fellows to put new skills to practical use in leading organizations, communities, & countries.”

Translated from double-talk that means the US government is cultivating & grooming an elite cadre of collaborators who will endorse neoliberal economic policies in their own countries, US & European military interventions, & in return will have status, privilege, wealth–the ‘same old same old’ of capitalism & colonialism.

There are other forces in Africa who see right through this cooptation of leadership, activists who don’t want to sell their souls for wealth & privilege but who want a decisive end to colonialism in all its forms in African countries. Those young African leaders will be forced to do political battle with the stooges groomed by the US State Department.

(Photo of Obama speaking to YALI summit 2015 from White House)