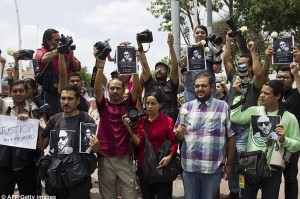 One can only stand in awe of these Mexican journalists defiantly holding up photos of murdered colleague Ruben Espinosa at a protest in Guadalajara City on August 2nd. Not just in Guadalajara, but thousands of defiant journalists, human rights activists, family & friends also rallied in Mexico City where Espinosa was brutally murdered & in Xalapa, the capital of Veracruz, which Espinosa fled in June because of surveillance, harassment, & because his life was being threatened. He had been beaten by police in 2013.

Mexico has one of the highest murder rates in the world for journalists; the state of Veracruz is considered the deadliest for journalists. According to Reporters Without Borders, 88 journalists have been murdered across Mexico since 2000; according the the rights group Article 19, seventeen have been killed in Veracruz & 37 have fled the state in fear for their lives since 2000. Eleven, including Espinosa, have been killed there since 2010, all during the administration of Governor Javier Duarte.

Espinosa worked for the investigative magazine Proceso & other media. He was tortured, bound, & shot in the head last Friday in his Mexico City apartment along with outspoken human rights activist Nadia Vera & three other women including the housekeeper.

In February, an unflattering photo by Espinosa of Duarte appeared on the cover of Proceso with the headline “Veracruz, A State Without Law.” Many believe Duarte’s henchmen followed Espinosa to Mexico City & murdered him

It takes extraordinary courage for these journalists not to back down or run for the border but to stand defiant. Our deepest respect & fullest solidarity.