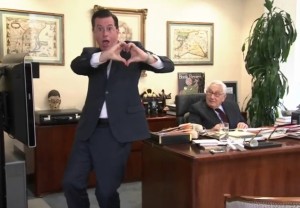 What has happened to satire in the age of neoliberal barbarism? Are Stephen Colbert & Jon Stewart the best we can do? Neither provides enough laughs to compensate for the amount of groveling they do before the status quo. They have guests like Paul Bremer (an architect of Iraqi destruction), Bill Clinton, Hillary Clinton, & others nearly as odious who they never think to challenge but only swap a few jejune quips that even canned laughter doesn’t respond to.

Satire is the use of humor, irony, exaggeration, & ridicule to expose & criticize stupidity, vice, treachery; it shouldn’t be used to kiss ass. If all you want to do is grovel, a few knock-knock jokes will cut it.

Colbert, in the persona of a naive ultraconservative, reduces satire to an amorality play. In 2006, when the world held George W. Bush in utter contempt for war criminality, Colbert hosted his “roasting” at the White House Correspondent’s Dinner. After all, the destruction of Iraq & the deaths of hundreds of thousands had to be worth at least a few laughs.

But the most despicable Colbert of all is the one who repeatedly includes Kissinger in skits on “The Colbert Report.” More than once, this international mass murderer has appeared in Colbert videos as an avuncular elder-stateman. Last night, Colbert interviewed him about his new book & referred to him as a “grandpa figure”. A “grandpa figure” responsible for massive bombing, assassinations, torture, coups, & mass murders with a death figure in the millions.

Satire is a wonderful art; sometimes it’s the only thing to take the edge off tragedy & sorrow. To reduce it to amorality & indifference to criminality is unspeakable. And that is why Colbert is no longer even remotely funny but just a parody of his own idiocy.