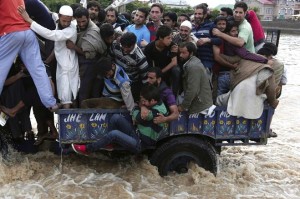 Many scientists aren’t quite ready to say record flooding on every continent (which at any one time has about a fourth to a third of the planet under deluge) is linked with global warming. Many studies do not find any link between melting Arctic sea ice & extreme weather patterns–or for that matter between massive deforestation & melting polar sea ice. Studies would however find a direct financial link between those scientists still scratching their heads about global warming & the corporations causing it by neoliberal plunder. Science has more than its share of people willing to sing for their supper–nearly as many as the US Congress. If we wait till the water is up around their ankles for these scientists to change their tune, we’ll be facing the Genesis Deluge without an ark.

These floods across Asia, South Asia, Europe, the Americas, Australia, Africa have caused catastrophic loss of life, livelihood, & property. This is not a matter of just calling for massive investments in flood & coastal defenses–although it most certainly includes that–but of altering the way neoliberal capitalism does business. They’ve proven they can’t steward the planet without taking us all out so their system is going to have to bite the dust. And time is becoming of the essence.

Right now one of the hardest hit areas is Kashmir & parts of Pakistan (which has been hit with at least five massive floods since 2003). As of September 7th, nearly 200 people in Kashmir & 205 in Pakistan have died in the floods. Several thousand Kashmiri villages have been hit, with 390 submerged under water. Most parts of Srinagar are submerged under 12 feet (3.7 m) of water. So far, 1,300,000 have been rescued, including 87,000 from Srinigar city.

We see the same images we saw during Hurricane Katrina: people standing on rooftops waiting to be rescued, people clinging to ropes & trees so as not to be carried away by flood waters, people fleeing in makeshift rafts. But mostly we see photo after photo of people evacuating seniors, disabled, children, animals. In this photo evacuating residents are holding up a man falling off a tractor trying to get out of Srinigar. One hates to think catastrophes are humanity’s finest moments but they certainly do show the glory human beings are made of.

Flood waters are a toxic brew of chemicals, sewage, & other pollutants & besides causing massive infrastructure damage (including devastation of farm land & livestock), raise the risk of waterborne diseases including typhoid, cholera, giardia, cryptosporidium.

The people of Kashmir are appealing for emergency aid & perhaps FB friends from Kashmir can suggest reliable agencies to contribute.