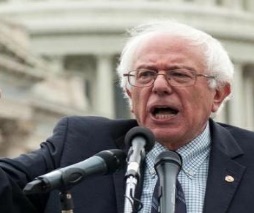 Yesterday, MSNBC’s Chris Hayes moderated a town hall meeting with Bernie Sanders in Philadelphia prior to the Pennsylvania primary election today. The interview aired on MSNBC & a full transcript is available online. It’s a cornucopia of shame.

In 2012, the NY Times exposed that Obama holds a meeting every week where they decide which alleged terrorists will be added to his “kill list.” Those on the list are targeted for assassination, usually with drone bombers. Hayes asked Sanders if he would keep the kill list if he became president.

The transcript reads:
“SANDERS: Look. Terrorism is a very serious issue. There are people out there who want to kill Americans, who want to attack this country, & I think we have a lot of right to defend ourselves….though, it has to be done in a constitutional, legal way.
HAYES: Do you think what’s being done now is constitutional & legal?
SANDERS: In general I do, yes.”

Hayes went on to ask Sanders if he agreed with Obama’s deployment of 250 special forces to Syria.

I think what the President is talking about is having American troops training Muslim troops, helping to supply the military equipment they need, & I do support that effort. We need a broad coalition of Muslim troops on the ground. We have had some success in the last year or so putting ISIS on the defensive, we’ve got to continue that effort.”

Sanders is a leading US senator adjudicating war & military appropriations. His supporters gave him all sorts of alibis for being completely ignorant of what happened in Gaza as a result of Israeli carpet bombing in 2014. What possible malarkey can they come up with to explain his grotesque caricature of what is going on in Iraq & Syria & of the fight against ISIS? How do you turn this crap into ‘hope & change’?

(Photo of Sanders from telesurtv)