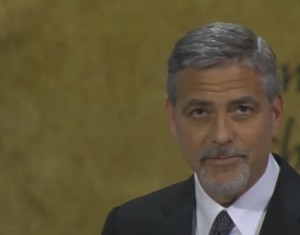 In one of his infrequent forays out of red-carpet life to political grandstanding, George Clooney joined the president of Armenia in a solemn ceremony to call the 1915 massacre of 1.5 million Armenians by Ottoman Turks a “genocide.” In a burst of political fervor & eloquence he called denial of the genocide “ridiculous.”

Our man would be so much more credible–& less ridiculous–if his episodes of humanitarianism weren’t associated with war-mongering for US troops to Darfur; if he could say even a word against US wars in Iraq, Afghanistan, & elsewhere; if he could protest US military aid to Israel & the ethnic cleansing of Palestinians; & of course, if he weren’t actively campaigning for Hillary Clinton who is associated with sweatshops, militarism, genocide, ethnic cleansing on several continents.

It might also help if he weren’t so irredeemably smarmy. Smarmy might work it at a Clinton fundraiser but it doesn’t cut it when you’re trying to be humanitarian.