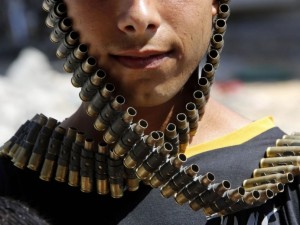 No this is not a Hamas fighter but he a Palestinian teenager in Gaza. Media (including the NY Times) did an analysis of the death count in the latest phase of Operation Ethnic Cleansing to counter the gruesome image of so many children riddled with shrapnel & dismembered by bombs. They concluded with a smug, amoral sense of righteousness that teens–the Hamas age–were the greatest number killed. And rabid Zionists around the world heaved with vindication–not that infants had been spared, but that so many teens had died.

Israel, the US, European leaders, & that creepy Ban Ki-moon claim all the deaths were regrettable & “collateral” (a psychotic military concept invented by a US stink tank for Iraq) & entirely the political fault of Hamas. They’re beating that alibi to death to make a racist lie & vilification a cliché that becomes history.

But evidence of war crimes from Gaza testify otherwise. This young boy wraps his head with a bandolier of spent bullets left by the Israeli army near his family’s bombed out home in Beit Hanoun. Beit Hanoun is not far across the apartheid wall from the hills of Sderot, Israel, where residents made an international spectacle of their psychoses by cheering on ethnic cleansing from lawn chairs. Did the most sophisticated, high-tech military in the world use bullets to destroy those alleged cement tunnels? Or were they more likely used for “collateral” destruction–like this young boy?

Stand with Palestinians, as they stand with justice in Ferguson. Don’t let history & justice pass you by. Keep rallying to demand Israel cease the bombing & end the blockade of Gaza; & evangelize for the economic boycott of all Israeli products (barcode beginning 729).