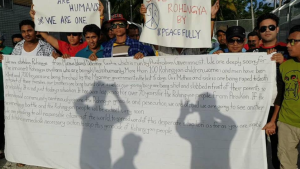 The Australian government runs an offshore detention center for refugees & immigrants on Manus Island, in Papua New Guinea (PNG). In May of this year, the PNG Supreme court found the center to be “unconstitutional & illegal” & ordered PNG & Australia to begin moving detainees out of the facility.

Australian government immigration policies are not distinguished from the barbarities of EU or US policies. The immigration minister responded that “Australia was not a party to the legal proceedings” & its border policies would remain unchanged. According to one young Rohingya detainee, conditions at the jail have deteriorated since the Supreme Court ruling.

Many Rohingya refugees are detained at Manus Island. Imran Mohammad Fazal Hoque, a 22-year-old Rohingya held there for 2-1/2 years wrote: “We are neglected, abandoned, tortured, humiliated, beaten to death & most notably accused of being criminals & terrorists without committing any crimes.”

This is a 26-page expose on the Manus Island detention center written by Imran. It’s a very important document for human rights & immigration rights activists to read. It’s important to remember that while Australia refuses Rohingya refugee status, its corporations have quite a substantial investment portfolio in Myanmar.

This photo is a protest by Rohingya detainees at the Manus Island facility on October 19th. Long live their spirit of defiance.