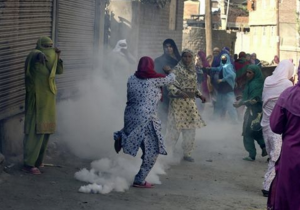 Day 105 of the military siege in Kashmir & pro-freedom protests continue across the Valley. That’s 105 days of unarmed protesters being fired at with live ammo, tear gas & sound grenades, pellet guns; thousands of youth arrested in nighttime home invasions; thousands injured, disfigured; hundreds permanently blinded or disabled in other ways. And still they protest.

Like the carpet bombing of Yemen & Syria to crush popular resistance to autocracy, the occupations of Kashmir & Palestine show above all how threatening massive democratic movements are to the powers that be, to the capitalist magnates who think they are gods. The power of defiance can move mountains politically & that is why it is opposed with such military violence. And still they protest.