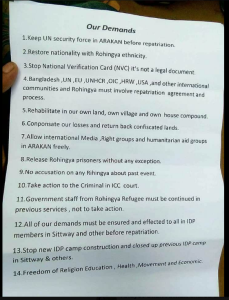 These are the repatriation demands of Rohingya refugees which were displayed on placards when a UN delegation recently visited refugee camps in Bangladesh. They contrast completely with the repatriation agreement signed between the Burmese genocidaires & Bangladeshi government which would return refugees to barracks in concentration camps in Arakan/Rakhine state. These are the essential conditions laid down for their voluntary return & not a one of them is likely to be honored. The only politically problematic demand is #1 calling for the deployment of UN troops to Arakan state. Given the violent history of blue-helmeted UN “peacekeepers,” it would be inadvisable in the extreme to trust in them for security against military & nationalist death squads in Arakan. The Rohingya could only give such trust if UN troops were put under the control of the Rohingya community in the state which is a mandate not likely to be forthcoming from the UN. If the UN still plays stupid about the character of this genocide & has done nothing to stop it, it can hardly be trusted to put lives on the line to stop violence against the Rohingya.

What’s most important about these demands is that Rohingya refugees are asserting their right to be central to the repatriation process & not excluded from decision-making. The Rohingya people are not just victims of genocide but are demanding agency in opposing it. To think that only six years ago the 2012 genocidal onslaught against the Rohingya was drowned out by the spectacle over Suu Kyi going to pick up her Nobel Peace Prize. The question is no longer “Who are the Rohingya?” because the Rohingya take their place as one of the most important political & freedom struggles of our era.