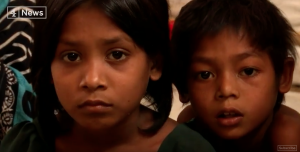 Prior to the recent visit of a UN Security Council delegation to Rohingya refugee camps in Bangladesh, an “international analyst” said that Bangladesh needs to provide “strong & unassailable evidence” backed up by documents to make a case for ethnic cleansing before the delegation. What idiocies are we expected to swallow like guppies & accept from officials? There are over a million Rohingya refugees with over a million stories of genocide & they are not unassailable enough? Don’t their voices matter? What kind of documents does the UNSC require for proof? Burmese passports from a regime that refuses to call the Rohingya by their own name & considers them illegal immigrants? A written declaration of genocide from the Burmese genocidaires who claim they don’t know why the Rohingya are fleeing? Genocide isn’t just trying to exterminate human beings but includes every attempt to pretend they don’t even exist so that their voices won’t be heard.

(Photo of Rohingya kids is a screenshot from 4 News)